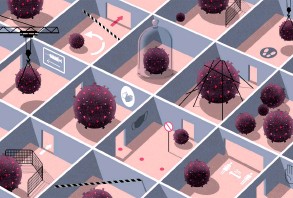 National Covid death rates are, inevitably, political. How could they not be when they are viewed as evidence for good or bad government on matters of life or death? How did the UK fare compared with, say, Germany? Should both countries have been more like Sweden? However, when new data arrives, far from settling arguments over which pandemic mitigation strategies worked best, it tends to further inflame disagreements or harden pre-existing positions. So it is with last week’s World Health Organization (WHO) report on Covid-associated deaths. The WHO estimates that around 15 million additional people died because of the pandemic in 2020-21, about 2.7 times higher than officially recorded deaths. While staggering, the estimated excess deaths didn’t come as a surprise to those who have followed the situation closely. If anything, it is lower than many may have anticipated. That more people died in the pandemic than have been officially registered as Covid deaths should be largely uncontroversial. Many countries did not have the diagnostic infrastructure to identify every Covid death. The WHO report seems to provide ammunition for any narrative and is unlikely to check the politicisation of the Covid debate. For example, India’s own official excess death estimate is about 10 times lower than the 4.7 million people reported by the WHO. Indian authorities vehemently rejected the methodology used by the WHO and its estimate for their country. They opposed publication of the report and released their own 2020 death figures to offer a counter-narrative. Many comparisons have been made with other countries to highlight the UK as either the epitome of failure or a roaring success. In fact, according to the WHO report, the UK has fared fairly unremarkably. An estimated 109 excess deaths per 100,000 people places it at 56th in the global ranking of “best performing” countries, and middle of the table relative to the European Union. The UK’s estimated excess death toll is below Germany’s and Italy’s, but above France’s. According to WHO estimates, Germany significantly underestimated Covid deaths, France overestimated them and the UK got it about right. Some countries became synonymous with particular pandemic mitigation strategies. Sweden was criticised by some for the lack of stringency of its measures and hailed by others as a shining example of how to protect citizens’ rights while navigating a health crisis. To the possible disappointment of both its supporters and detractors, Sweden’s estimated excess death of 56/100,000 is about half the UK’s and, while it is above those of other Nordic nations, it still looks flattering relative to the majority of EU countries. An additional reason why the WHO report won’t settle many arguments stems from Covid excess death figures being difficult to measure precisely. The number of actual deaths is accurately registered in high-income countries but not necessarily in many parts of the world, where estimates can be crude. Getting an accurate number for the hypothetical number of deaths that may have occurred had the pandemic not happened is even more challenging. Richer countries tended to do better overall, with the exception of the US. The stringency of mitigation measures does not seem to be a particularly strong predictor of excess deaths. While countries that achieved low excess deaths tended to have fairly tight measures, the worst performer is Peru, despite enforcing the harshest, longest lockdown. The WHO report will undoubtedly be analysed extensively by pandemic planners, but is unlikely to be of much help to inform actionable mitigation strategies. The major message is that richer, more insular countries kept excess deaths low by limiting the spread of the virus until the arrival of vaccines and then achieved high vaccination coverage in elderly people. Those relative success stories largely built on pre-existing geographic and socioeconomic advantages rather than wellthought-out mitigation plans. Read that way, the main thrust of the WHO report boils down to reducing inequality, improving health and providing a robust social and healthcare system offering the best preparedness. That would be money well spent, even if the next pandemic takes a while to hit •