Wishing on a star

Astronomers hope this could be the year they witness a supernova, which could help shed light on the creation of matter in our galaxy 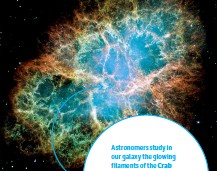