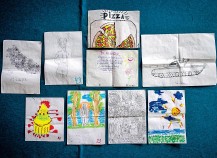 Spike, the quarrelsome dachshund, got something every meal, even as the humans trapped in the bunker under Azovstal steelworks were wasting away from hunger. By the end there was so little food and water that adults were eating one tiny meal a day. Two cups of macaroni went into 10 litres of water, and that “soup” had to feed 30 people. The children ate twice. Still, they all shared their food with their pet. “Someone would give him a spoon of porridge and everyone in the family would give him three or four spoons when they ate. Luckily, he is small,” said Olena Chekhonatski. She fled underground to escape shelling at the start of the war with her husband, Yegor, and two sons, 12-yearold Artem and 17-year-old Dmitry. They expected to stay two weeks, but only emerged two months later. “I was never a dog person before Spike arrived,” she said, with a rueful glance at the dog she starved herself to keep alive, as he bounded along on the family’s first day of freedom since late February. The family were part of the very last group of civilians officially evacuated from Azovstal, arriving in Ukrainianheld territory on the evening before Putin declared his war as a “sacred” mission to liberate people like their family, at a military parade in Moscow. “What liberation? What was the reason for all that?” Olena asked. “Our first feeling is disbelief we made it out. The last days we were losing hope. The shelling was so heavy, it seemed impossible to get out,” Yegor added. While the family thought that they might be in the bunker for two weeks, others they sheltered with had prepared for only two days. More than two months later, they were still there, supplies of food and water dwindling as the buildings above them were ripped apart by Russian bombs. They had been deprived of almost everything except sleep. “Sleep more, eat less. Because when you are asleep, you don’t need to eat,” Yegor said. When they moved in, there was electricity, but their world rapidly shrank in the mouldy basement, its dank smell seeping into their clothes and skin. The electricity was cut off after a day, and there was no internet, just a small radio. They used car batteries to power LED lights, and made the hours pass with chess, backgammon and cards, and someone made a Mariupol Monopoly set. But every day was a gamble with death. Even a trip to the toilet meant risking their lives, because the latrines were on the ground floor. For children and older and disabled people, there were buckets in the shelter, which the adults took turns emptying. “No one came out of there unchanged,” said Oksana, an Azovstal employee who asked not to give her full name. “They were one person when they went in, and another person when they came out.” In the early days, the children were obviously traumatised, she said. The teenagers spent hours staring at the walls, the younger children shied away from touch, and when she encouraged them to draw, they would do pictures only in black. Over time they adjusted a little to their terrifying new existence. “Later they let us hug them, especially during the bombing. They made friends, and the older kids taught the younger kids. There was a four-year-old who could barely read the alphabet when they arrived, but by the end he could do maths and read and write well.” They tried to leave when a “green corridor” was announced in early March, but were driven back underground by fighting. They had watched dozens of people leave, including residents of a neighbouring bunker that ran out of food weeks before they did, but each trip was a gamble. “When the children went outside, we made tags on their clothes with their names, blood types and date of birth. So at least if they were killed, it would be easier to identify the bodies,” Oksana said. One group decided to hike the 100km to Berdyansk, through battlefields, minefields and ruins, because that seemed less terrifying than staying. “We don’t know if they made it.” Then they heard about the final attempts to set up civilian rescue corridors on the radio and decided to see if they could find a way out. Soldiers found them waiting outside, and said they had 15 minutes to get ready. They worry that there may be other desperate civilians trapped under the plant, who didn’t have radios to learn about the evacuation. At a Russian “filtration” camp, where evacuees are searched by authorities, the Chekhonatski family met a teenager who had spent the war hiding in a basement just metres from theirs with two other men. They had no idea he was there. They also worry about the troops who got them out. “Not even heroes … I don’t know how to describe it. There’s no word to express all our gratitude for what they’ve done for us,” Yegor said. “I beg God, I hope some miracle happens and they make it out of there alive.” Oksana was overwhelmed when she was able to charge her phone and turn it on after two months, to find a flood of messages from family, relatives and friends. Many were the beneficiaries of a charity where she worked, which provided aid to families with young children. “I never imagined I would be the one needing help,” she said.