By Miranda Bryant MIRANDA BRYANT WRITES FOR THE GUARDIAN AND OBSERVER 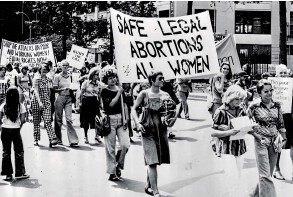 It was over the Thanksgiving holiday, catching up with old high school friends, that Frances Beal heard that Cordelia had died. Just like the now 82-year-old Black feminist and activist, her friend had gone to college, but she didn’t make it through her first year because, like anybody who wanted to terminate a pregnancy in the US in 1958, she had to undergo a backstreet abortion. “She was dead because she’d had an illegal abortion. And it had gone bad. And if you take a look at the statistics, the number of women that died from illegal abortions was tremendous,” Beal, who later joined the movement to legalise abortion, said. Now, more than 60 years after Cordelia’s death and nearly half a century since Roe v Wade legalised abortion, she fears many more women could die after a leaked draft document appears to show the supreme court is preparing to overturn the landmark ruling. “The overthrow of Roe v Wade equals the murder and assassination of women and that’s something that I feel in my heart will happen again,” said the author of the pioneering 1969 pamphlet Double Jeopardy: To Be Black and Female. What happened last week should send a warning signal not only to Americans but the world, she said, calling on people to take to the streets in their millions worldwide as they did after the police murder of George Floyd. “Unfortunately, America often acts as a precursor of things to happen in other countries. And if they can attack and destroy a woman’s right to choose an abortion in the US, it won’t be too far before the right will be destroyed in other countries around the world. It’s a basic human right for a woman to control her own body,” she said. The death of her friend enabled Beal to immediately take a strong stance on abortion access and she told her story to mass meetings in New York. To face the same struggle is both depressing and angering, but she hopes it is an opportunity for women to unite as they did in the 60s and 70s. “The question of access to abortion, even as it was legal, was somewhat limited because of class and racial differences. We don’t forget that,” she said. “But we can put aside those class and racial differences, as well as generational differences, and stand together and say: ‘No, this is not something that we are going to accept. We didn’t accept it back in the 1970s and we’re not going to accept it today.’” Merle Hoffman, 76, has been on the frontlines of the movement for more than 50 years since giving up her plan to become a concert pianist. She founded Choices Women’s Medical Center in Queens, New York, one of the first abortion clinics in the US. In 1989, she declared a “state of emergency” in women’s rights in front of St Patrick’s Cathedral with a huge coat hanger. Today she continues to use the coat hanger at protests and speeches, and she keeps it in her office. While the latest development is “a tremendous disaster”, she said it has been a very long time coming. “They’ve been persistent, consistent and this has been their goal, and with the three new conservative judges on the court, they’ve managed to be in the position where they can actually do this,” she said. Hoffman, who recently helped to found a new organisation, Rise Up 4 Abortion Rights, said it is a “generational struggle” that she doesn’t see coming to an end any time soon. “It’s strange, it’s Kafkaesque. In a sense, I’m reliving my youth.” After Roe v Wade, she said, many people “metaphorically put their political feet up on their desks and said: ‘We’ve got it covered’”. She added: “Well, you never have it covered. We have to fight issues in the civil rights struggle again, voting rights, all sorts of things. It’s never covered because there’s always opposition. It’s a dynamic force.” Observer