If he hadn’t become a musician, Paul McCartney says, he would probably have been an English teacher. He has fond memories of his English teacher, Alan Durband, who taught the young Paul the value of close reading. When he wrote songs with John Lennon, the chords and melody came first. But the words mattered too. Where the straight-up, irony-free early lyrics wooed their audience through a flurry of pronouns – She Loves You, From Me to You, Please Please Me, etc – the later lyrics aspired to poetry. Take Eleanor Rigby, which began as a song about the kind of old lady McCartney did chores for as a scout during bob-a-job week. “The secret to successful songwriting is the ability to paint a picture,” he says, and the picture of Eleanor Rigby “picking up rice in the church where a wedding has been” perfectly captures her loneliness. Numerous biographies have traced the origins of Beatles songs. This is the McCartney version. Spread over two lavish volumes and more than 900 pages, and supplemented by memorabilia from the million-plus items in his archive (photos, posters, paintings, jottings and letters), the book came about through conversations with the poet Paul Muldoon: 50 hours of them between 2015 and 2020, covering 154 songs. On the face of it, the two Pauls have little in common: one a complex poet, the other a pop star. But they share an Irish heritage. At any rate, the two hit it off. Though Muldoon has edited himself out of the text, you can sense him in the background, prompting and prodding. The biggest influence on McCartney’s music was the death of his mother, Mary, when he was 14. He used to deny that she lay behind the words of Yesterday (“Why she had to go I don’t know, she wouldn’t say”) but now accepts she must have been. He wrote more directly about her in the year she died, 1956, in I Lost My Little Girl, a song not released till 1991. And she is namechecked (“When I find myself in times of trouble/Mother Mary comes to me”) in Let It Be, a phrase she liked to use. McCartney has similarly fond memories of his trumpet-playing father, whose love of crosswords he compares to his own approach to writing songs. When he sat down with Lennon – two guitars, two notepads, two pencils – they would have a song written within three hours: “After that your brain goes a bit.” He talks a lot about Lennon, nostalgically and with affection (“I still have him whispering in my ear after all these years”), and is keen to emphasise that they ended on good terms. Harsh words were exchanged when the Beatles broke up, with the acerbic John scornful of Paul’s taste for “silly love songs”, to which he retaliated by writing a song called Silly Love Songs. But till the breakup their differences were productive: “I could calm him down and he could fire me up.” And their tugof-war rivalry produced brilliant harmonies. “We thought of ourselves as Lennon and McCartney from early on,” he says, a double act like Gilbert and Sullivan or Rodgers and Hammerstein. The lyrics he wrote as a solo artist and for Wings are included here too. And many aspects of his offstage life are discussed along the way: his pacifism, vegetarianism, bird-watching, parenting, painting and unapologetic cheeriness. All kinds of music influenced him, Cole Porter as well as Little Richard. But the real revelation is how much he took from books. Among the writers he alludes to are TS Eliot, George Orwell, James Joyce, Philip Larkin, Harold Pinter, Eugene O’Neill, Lewis Carroll and Charles Dickens. The tone of the book is conversational, and also quote-worthy: “It’s not so much that I compose songs, they arrive”. The most startling such arrival was Yesterday, the tune of which was in his head when he woke up one day. The backstories to the songs are often as interesting as the lyrics. With Ticket to Ride he and John were also thinking about a trip they’d made to Ryde, on the Isle of Wight; Blackbird, with its “broken wings”, was written after the assassination of Martin Luther King; “the portrait of a community in Penny Lane took its bearings from Dylan Thomas’s Under Milk Wood”. The book won’t persuade the Nobel literature committee to honour McCartney as they did Bob Dylan, and though he once wrote a song about the Queen, he won’t be the next poet laureate. Stripped of the music, the words on the page can look random or banal. But at best he’s a wonderfully versatile lyricist: troubadour, comedian, elegist, social commentator, pasticheur. And anyone with even half an interest in the Beatles will find The Lyrics fascinating. 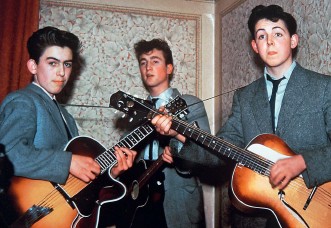