A charitable retreat reveals the limitations of celebrity activism

Pick a humanitarian emergency in any part of the world, and the needs will seem remarkably consistent. Once people have escaped immediate danger, they need food, shelter, clothing and medical assistance – the things, in other words, that sustain us physically. The most pressing questions are about how to source the items and services required, and how to distribute them effectively. What determines whether an emergency is resolved quickly or allowed to persist, however, is politics. And if you want to see what happens when political solutions fail, then the scrubland of the northern French coast, just across the Channel from England, is an instructive place to look. The recent decision by Choose Love – a celebritybacked charity set up in the aftermath of the 2015 European refugee crisis – to withdraw most of its funding for aid projects based in northern France, does not indicate that the needs there have changed in nature. There are an estimated 2,000 migrants camped out in and around Calais, looking for a way to reach the UK. Many of these people are destitute; as winter approaches, local aid organisations, which provide everything from clean water and cooking equipment to phone charging, have launched an urgent appeal to make up the shortfall in funding. Yet if the situation on the ground has not changed significantly, the context in which aid is distributed has been transformed. For at least two decades now the French authorities, with British encouragement, have tried to make living conditions as difficult as possible, by demolishing camps and evicting squats. But the outpouring of public sympathy in 2015 – when hundreds of thousands of people across Europe demonstrated in support of refugees, and many others joined volunteer efforts to provide material help – forced them to temporarily back off. Choose Love was founded, initially under the name Help Refugees, by a trio of media-savvy campaigners. It won the backing of celebrities including actors Olivia Colman and Phoebe Waller-Bridge, and raises money partly by selling fashionable branded goods. Today, the charity has expanded to work with refugees in 22 countries and has raised $47m. Now, politicians talk once again of migrants in Calais as an inconvenience that must be eliminated – by repelling people rather than establishing routes to safety. In a statement posted on its Instagram page, Choose Love said that it had been forced to make “some difficult decisions” in a strategic review, and that factors including the pandemic had prompted the decision to largely pull out of Calais. Its decision tells us something broader about the limits of humanitarian activism, which seeks to mobilise the might of branding and celebrity endorsements. It can be a powerful way to raise money and distribute resources in targeted ways – but what happens when the attention moves elsewhere? The promise of this type of action is that it offers us the opportunity to address the world’s problems with minimal disruption to our own privileged lifestyles, or to the system that enables them. As the late theorist Mark Fisher wrote in his book Capitalist Realism, it’s a form of social protest, but one that offers the “fantasy … that western consumerism, far from being intrinsically implicated in systemic global inequalities, could itself solve them. All we have to do is buy the right products.” During the triumphant era of global capitalism, before the crash of 2008, this model of action aimed high. Live 8, a string of benefit concerts in 2005 that marked the 20th anniversary of the original Live Aid, demanded nothing less than the abolition of global poverty. Bono’s Product Red, a fundraising partnership with corporate brands launched the following year, went a step further. “Philanthropy is like hippy music, holding hands,” the U2 frontman said. “Red is more like punk rock, hip-hop, this should feel like hard commerce.” The picture today is more fragmented. A new class of global billionaires have little need for even the illusion of popular consent, using their vast wealth to pursue individual passions from space travel to disease eradication. Campaigns that capture popular imagination, meanwhile, are now more likely to centre on crises closer to home. Think of the fundraising drives that have dominated the British public’s attention in recent years: we have been asked to raise money for the NHS and to stop children from starving during the school holidays – tasks that our government, one of the world’s wealthiest, should be able to carry out itself. Calais is a place where governments have deliberately created scarcity for political ends. The simple but urgent act of providing aid to others takes on a potentially greater significance, because it is a challenge to the established way of doing things. We should keep giving that help in Calais – but we should also be asking why it is necessary in the first place • 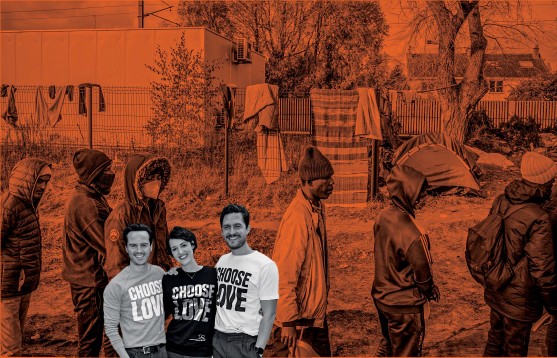