The world is ignoring Tigray’s year-long nightmare of war

On 4 November 2020 the world was occupied with the US election. For myself and many others with family and friends in Tigray, however, that day marked the beginning of a continuing nightmare. And it’s one that the world has, mostly, ignored. When on that day the Ethiopian prime minister, Abiy Ahmed, a Nobel peace prize winner, announced a military offensive in Tigray, the region was cut off from the world. Phone and internet was cut, banks were closed and journalists were barred from the region, which lies in the far north of Ethiopia and is home to more than 7 million people. Those of us with family in Tigray braced ourselves, waiting to hear what had become of family and friends. Now, a year on, we have a manmade humanitarian catastrophe. UN relief chief Martin Griffiths said earlier this month that “Tigray is probably the worst place to live in the world right now”. In the first two months of the war, more than 56,000 people fled to Sudan – bringing with them harrowing memories of massacres at the hands of armed militia, Ethiopian soldiers and troops from Eritrea (which lies to the north of Tigray). Ethiopian soldiers subsequently closed the border, cutting off the refugee route. From a personal perspective, the war has had a huge impact. Those of us in the Tigrayan diaspora receive news of each massacre, air attack and mass arrest wondering if family or friends could be among the victims. Four weeks ago there were multiple bombings in Tigray’s capital, Mekelle, which resulted in heavy civilian casualties. There have been reports of concentration camps housing ethnic Tigrayans including children and pregnant women. Last week we heard of a wave of mass arrests of Tigrayans in the Ethiopian capital, Addis Ababa, their only crime being their ethnicity. While writing this article, I discovered that a family member is one of the many Tigrayans arrested. The war on Tigray has seen girls as young as eight become the victims of sexual violence, with multiple reports of women being abducted and gang-raped by Ethiopian troops, Eritrean soldiers and armed militia. Earlier this year, the UN Population Fund (UNFPA) projected that around 22,500 victims of sexual violence during the conflict will need medical care this year. Due to the government-enforced media blockade, these reports are probably the tip of the iceberg. The breadth of the destruction has led Tigray’s healthcare system to the verge of collapse. Médecins Sans Frontières reported that 70% of health facilities have been looted by Ethiopian and Eritrean soldiers. Reports from the region also include the destruction of churches and mosques, the murder of humanitarian workers, mass displacement, as well as journalists being assaulted and arrested by government forces. The war has also brought with it a ghoul of Ethiopia’s past – a manmade famine. In Tigray right now, more than 5 million people are suffering critical food insecurity. “There is famine in Ethiopia right now,” UN aid chief Mark Lowcock said in June. With the region still under a “de facto humanitarian blockade” by the Ethiopian government, the crisis is set to get worse. The war has spilled over into other regions, namely Amhara and Afar, where civilians now face severe food insecurity and mass displacement. During the last conversation I had with my family in Mekelle, before the phone lines were cut again, my aunt asked me to pray for the people of Tigray and for an end to their suffering. My younger cousin, who until the war started was a university student with dreams of becoming an engineer, made me promise that I would share what the people of Tigray have endured. It has been a while since I have spoken to them, and like many people with family in Tigray, I don’t know when I’ll hear from them again. I can’t even be sure they are still alive. Why do so few people know about the plight of Tigray? For the most part, the print and broadcast media has given the human suffering little prominent coverage Frighteningly, due to the blockade, the full scope of that suffering is still not known. When attempting to comprehend the brutality the civilians of Tigray have been subjected to, it’s hard to imagine how they will be rehabilitated, how many families have been torn apart and how such trauma will impact young people? What we do know is that the people of Tigray have suffered gravely. They are crying out for help, and they need someone to hear them • 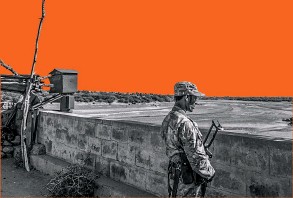