Is Europe entering a dangerous new age of instability? Not since the height of the cold war with the Soviet Union has it looked so vulnerable to hostile forces. Accumulating external threats and internal divisions, coupled with a weakening US security alliance, relentless Russian subversion and power-hungry China’s war on western values are exposing fundamental strategic weaknesses. Europe increasingly resembles a beleaguered democratic island in an anarchic world, where a rising tide of authoritarianism, impunity and international rule-breaking threatens to inundate it. Some leaders understand this, notably French president Emmanuel Macron, yet long-term policy remedies elude them. For example, Belarus dictator Alexander Lukashenko’s use of migrants to pressure the EU is plainly outrageous. Yet it worked, in the sense that Germany’s caretaker chancellor, Angela Merkel, phoned him for a chat, ending his post-coup isolation. It was a concession to a thug, not a lasting solution. Talking of thugs, Russian president Vladimir Putin’s ongoing intimidation of Ukraine risks a widening conflagration. The latest border build-up of 90,000 Russian troops may be sabre-rattling, similar to provocations in the Donbas and Black Sea last spring. If not, Europe will only have itself to blame. Putin’s importunities stem directly from its de facto acquiescence in his illegal 2014 annexation of Crimea. Instability on Europe’s periphery extends to the Balkans amid fears that Bosnia-Herzegovina is slipping back into conflict 26 years after the Dayton peace accords. Resurgent ethnic nationalism, embodied by the separatist Bosnian Serb leader, Milorad Dodik, is fuelled by Belgrade and Moscow. Worse is the EU’s inability to fulfil promises of closer integration with the region. Europe’s relationship with Turkey, a key gatekeeper, is dysfunctional, too, thanks partly to Recep Tayyip Erdoğan, its deeply unpleasant president. When he menaced EU members Greece and Cyprus last year, Macron sent naval forces to the eastern Mediterranean. The rest of Europe sat on its hands. Erdoğan is also meddling in Ukraine yet Brussels pays him to keep out Middle Eastern refugees, so hardly dares challenge him. The circle of instability squeezing Europe is about more than actual or potential armed conflict. One of its bigger dilemmas is migration. Despite the 2015 Syrian refugee crisis, the EU still lacks an agreed, humane policy. That guarantees more trouble down the road. One of the main objectors, ironically, is Poland, which rejects migrant quotas. Yet faced by border mayhem, its rightwing leaders who, like Hungary’s Viktor Orbán, are in a bitter fight with Brussels over rule of law and democracy issues, appealed for EU solidarity. The way much of European opinion appears to have accepted illegal pushbacks and routine mistreatment of asylum-seekers reflects another self-inflicted wound: the increased influence of xenophobic, rightwing populists and the re-normalisation of circa 1914 ultranationalist politics across Europe. If Europeans will not stand up for western democratic values in a world overrun by Donald Trump copycats, who will? Sadly, they cannot look to Britain. No longer a trusted friend, the UK under Boris Johnson, sneering from the sidelines, has become another peripheral conflict zone for the EU, more irritant than ally. Defence minister Ben Wallace used the linked Belarus-Ukraine crises last week to advance the Brexit agenda and seal arms deals with Warsaw and Kyiv. Tellingly, the UK sent troops, not humanitarian aid, to the Polish border. Europe’s age of instability also owes much to events beyond its control. Few forecast Trump would try to blow up what Franklin D Roosevelt called the “arsenal of democracy”, and the western alliance with it. He may yet try again. Likewise, few predicted, as Merkel now admits, that China would emerge as such a domineering, economically aggressive, anti-democratic competitor. US president Joe Biden reassures Europeans that Nato, even after Afghanistan, is as vital as ever. But his video summit with China’s Xi Jinping showed where his focus lies. Putin sees this, and smells blood. Europe’s gas supply is one pressure point. Covert cyber-attacks are another. Russia’s reckless anti-satellite missile test was the first recorded act of hooliganism in space. Europe’s inability to make Putin pay a price for aggression in Georgia and Crimea, his decimation of Russian democracy, his foreign election meddling, and his murderous attacks on opponents on European soil heightens a sense of decline. On China, there is nothing close to a united front. Such weakness encourages other predators. So what is to be done? Europe is divided. East Europeans still place faith in Washington not Brussels, despite portents of another transatlantic rupture if the Democrats lose the White House in 2024. The EU bureaucracy is feebly led, its parliament toothless. Germany lacks a proven leader. Macron faces an election against a Russian-backed far right. Yet it is Macron’s ideas of enhanced European political, security and military “strategic autonomy”, and a stronger, more fiscally and economically integrated EU, that offer the most hopeful path. EU defence ministers last week discussed a “Strategic Compass” plan to boost joint capabilities. But agreement on proposed “rapid-deployment forces” and the like seems a long way off. As France prepares to assume the EU presidency, will other leaders recognise this critical moment and back Macron? In a world of sharks, snakes and scary monsters, Europe’s independence, cohesion and values are on the line like never before • 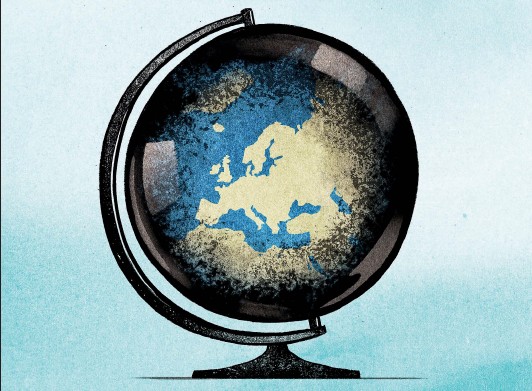