Germany and the Netherlands have been told they should face still tougher Covid restrictions as the German health minister, Jens Spahn, made the startling prediction that most of his compatriots would be “vaccinated, cured or dead” by the end of winter. With Europe again the centre of the pandemic, ushering in tighter controls mainly on the unvaccinated across the continent, on Monday Austria became the first west European country to re-enter lockdown since vaccination began earlier this year. Stricter rules have already sparked clashes in Belgium and the Netherlands, with the Dutch prime minister, Mark Rutte, describing the rioters as “idiots” and his Belgian counterpart, Alexander de Croo, calling the violence “absolutely unacceptable”. “Probably by the end of winter, more or less everyone in Germany will be vaccinated, cured or dead,” Spahn said. “That sounds cynical, but it’s the reality.” About 68% of Germans and 66% of Austrians are fully vaccinated, among the lowest in western Europe. Eastern European countries, where vaccination rates are even lower, have been experiencing some of the highest death tolls in the world, with hospitals overrun in Bulgaria and Romania. More than 38,000 new cases were confirmed in Germany on Monday, and a sharp rise in the last few weeks has left intensive care units near capacity. The worst-hit regions have ordered new shutdowns, including of Christmas markets. In Austria, the seven-day Covid incidence rate hit a record 1,110 per 100,000 people, prompting the government to tell people to work from home if they can and to shut cafes, restaurants, bars, theatres and non-essential shops for at least 10 days. People may leave home for limited reasons, such as going to workplaces if they cannot avoid it, buying essentials or taking a walk. The country has also announced that vaccines will be mandatory from 1 February, one of very few nations in the world to do so. The Czech Republic and Slovakia also banned unvaccinated people from some shops and services, including pubs, from Monday. In Germany, a Social Democrat MP, Karl Lauterbach, called for a “radical” vaccine pass strategy, adding: “A general vaccine mandate [shouldn’t be] taboo.” Lothar Wieler, the head of Germany’s Robert Koch Institute disease control agency, described compulsory vaccination as a “measure of last resort” but did not rule it out. The outgoing government said it would leave the decision to the next administration. The return of severe Covid restrictions brought about 40,000 protesters on to Vienna’s streets last Saturday, resulted in violent demonstrations in Brussels, and led to three nights of rioting across the Netherlands over the weekend. In Brussels last Sunday, officers fired water cannon and teargas at a protest that police said was attended by 35,000, demonstrating against a ban on the unvaccinated from venues such as restaurants and bars. Local media reported a mix of people at the demonstration, including the far right and those espousing anti-vaccine conspiracy theories and antisemitism, as well as seemingly apolitical people opposed to vaccination, including entire families. The daily newspaper Het Nieuwsblad reported that healthcare workers stood shoulder to shoulder with people who had pinned Jewish stars on their clothes in protest at what they called a Nazi regime. One nursery nurse, Tina Cleybergh, told the paper she had come to the protest because the Covid pass had created division in society, “in which unvaccinated people feel labelled as criminals”. Belgium’s home affairs minister, Annelies Verlinden, said: “A mature democracy respects the opinion of a minority, but does not accept that a few abuse their protest vote by force. Vaccinated or not, it is important we continue to follow the measures.” At least 145 people were arrested after the Dutch protests against the country’s new three-week partial lockdown, which began in Rotterdam last Friday and spread to cities including The Hague and Breda. Four demonstrators were wounded and several police officers injured. 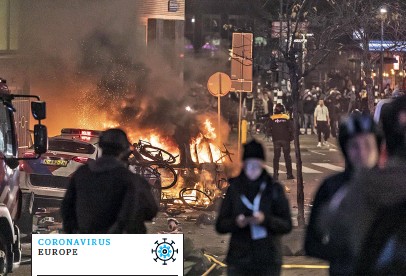