English cricket has issued an unreserved apology to Azeem Rafiq, saying the racism he experienced is a blight on the game, before promising to take swift measures to restore trust. The apology, which came after crisis talks at the Oval between the ECB, first-class counties and the sport’s other key stakeholders, praised the former Yorkshire player for “shining a light on our game that has shocked, shamed and saddened us all” and committed to publishing a 12-point action plan this week. “Racism and discrimination is a blight on our game,” the joint statement said. “To Azeem and all those who have experienced any form of discrimination, we are truly sorry. Our sport did not welcome you, our game did not accept you as we should have done. We apologise unreservedly for your suffering.” Meanwhile, the ECB chief executive, Tom Harrison, whose job was thought to be under threat after a faltering performance in front of MPs, emerged from the meeting saying he retained the backing of the game – and was now determined to enact change. “I feel passionately about this issue,” he said. “It’s something I feel to my core. I’ve been trying to drive an inclusive and diverse sport from the moment I arrived as chief executive in 2015. I feel very motivated and very supported to make sure that change happens in the game. “What are the reasons we are experiencing cultural difficulties in the dressing room? What are the reasons this abhorrent behaviour of racism in our game has attacked the high performance space?” Harrison’s comments were largely long on platitudes and short on specifics. However, he did admit: “What we need to do is make sure we’re listening to victims of racism. The ECB has those processes in place, I think in future it’s more than likely the ECB would step in immediately to take steps to understand and investigate fully. “Speaking to cricket fans who will be looking very hard at the wider game for tangible action, that’s what we will be delivering. Whether it’s about cultural change in the dressing room, standards for recruitment of staff through the game, a range of different points over 12 areas.” The talks came at the end of another torrid week for the sport, which began with Rafiq’s shocking revelations of institutional racism in cricket in front of the digital, culture, media and sport select committee. Since then another cricketer, Alex Hales, has apologised after a photograph of him emerged in blackface in 2009 while Rafiq has also apologised for antisemitic comments he made when he was 19. The sports minister, Nigel Huddleston, had warned cricket that the government would be prepared to take the “nuclear option” of imposing a regulator and looking at how the sport was funded if it did not enact significant change within weeks or months. Cricket officials promised further talks and an action plan. “We will continue to listen, and make swift, positive changes to the culture of the game,” they added in a statement. “We will embrace and celebrate differences everywhere, knowing that with diversity, we are stronger. As a game, we discussed a series of tangible commitments to make cricket a sport where everyone feels safe, and everyone feels included.” 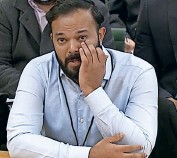