Covers off for racism in Yorkshire cricket

Every year, a British Asian small business owner in West Yorkshire sends his neighbour a card and leaves a gift on his doorstep. And every year, without fail, that neighbour ignores him. “Ever since we moved in, he won’t look at me and my family, he doesn’t respond when we say hello. He even planted conifers so we couldn’t see into his garden and he can’t see us,” the man, who wished to remain anonymous, said. “But I still send him Christmas cards and buy him a gift. He won’t even open the door when I knock, so I just leave it on the doorstep.” Azeem Rafiq’s devastating testimony on the racism he experienced as cricket player has resonated deeply with the British Asian community in Yorkshire. The shocking allegations, in which terms such as the P-word, “elephant washers” and “you lot” were commonplace and that players of colour were referred to as “Kevin”, has shone a blistering light on prejudice in the sport. But the issue of racism in the ethnically diverse county goes further than just cricket. The business owner is one of many prompted by Rafiq’s testimony to reflect on poisonous interactions that are part of daily life. Atif Aslam, a 26-year-old youth worker in Sheffield, used to tell people he had not personally experienced racism. But he has memories of walking home from mosque as a young child, wearing his traditional clothing, and white men in white vans shouting the P-word as they drove past. “You internalise it as that’s the norm,” said Aslam, who works for Ellesmere Youth, a part of Levelling the Playing Field, a national initiative that engages children from ethnically diverse communities in sport and prevent them becoming involved in the criminal justice system. “It was so common that it didn’t faze us. We never went home upset about it.” That disconnect finally broke last week after Rafiq appeared before a parliamentary select committee. Described as a landmark moment for cricket, Rafiq won widespread praise for his resolve and courage. Mohamed Raje, 48, who was born in Batley, and owns The Studio, a popular barber’s in Heaton, Bradford, was keen to emphasise that “there are many good people” and he has friends and customers from all cultures, creeds and religions. Raje said he knew from personal experience that institutional racism exists. “I’ve been a hairdresser since I was 13, and I used to work in quite a prestigious salon, and would find I never used to get promoted, but people behind me always would.” He recalled his days at an all-boys’ school where “at the end of term, there would be ‘[P-word]-bashing’ from the white lads”. These days, people wouldn’t use the P-word to his face, but “people use it”. “If I’m in a room, white lads might refer to the [P-word] in the room,” he said. A customer, who didn’t want to be named, said: “It’s not about cricket, love, racism is embedded ... we need to understand that we will never be accepted in this country. We were born here, we studied here, we spend our money here, we pay our taxes here, are we ever going to be accepted in society? We never will be.” A few doors down, Balquis Rashid owns a cafe, Fresh Fillingz. While serving panini and lasagne, she said she felt hopeful that times had changed. “I was a 70s child, there was a lot of it back then, with the National Front. But in 19 years of running this cafe, I’ve never had a problem.” A few miles away at Parkside Sports Centre, a community hub, an afterschool session for children of Afghan interpreters who had recently arrived in the ward was being held. For Talat Sajawal, the 42-year-old manager, and Haqueq “Aki” Siddique, 54, who runs the West Bowling Youth Initiative to support young people through volunteering projects, the conversation sparked by Rafiq’s experiences was nothing new. The pair, cricket-lovers who coach junior teams, took part in a documentary about the problems of class, race and cricket in Yorkshire back in 1993. In his office, Siddique pulled out a thick newspaper clippings file, including several articles about racism in the sport dating back decades. Siddique described the challenges to hit their community as “A,B,C”, for austerity, Brexit and Covid. Their ward of Little Horton has one of the highest rates of youth unemployment in Bradford, with 40% of the children in Bradford East living in absolute poverty, double the national rate. The community could also add D – for discrimination, said Siddique: “We just don’t need this.” Sajawal, who is also an independent local councillor, described the generational differences in attitudes to racism. “Our parents experienced the raw form first hand,” but had believed for years that they would eventually return to Pakistan and so “just put up with it”. “The feeling from people in my generation is that we’ve always been the underdog.” For Aslam, who is a level two cricket coach and runs sessions for children, Rafiq’s declaration that he wouldn’t let his son play was agonising to hear. But he finds himself asking the same question that many others ask: “How do I feel comfortable sending these kids to these places?” 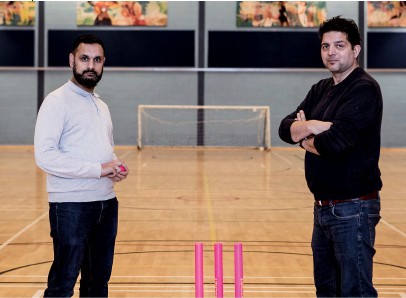