By Salmaan Farooqui and Ashifa Kassam

When flood waters swept away the highways in and out of Tricia Thorpe’s small town in the Canadian province of British Columbia, there was no way in or out for days. For a while, it seemed the road out of her property would be destroyed too. “My eldest daughter thought I was going to flip out when there was no road access out,” said Thorpe, who lives in Lytton in Canada’s mountainous west, nearly 300km north-east of Vancouver by road. “But we’ve been through so much now that sometimes you’re sort of numb as to what’s going to happen next.” She had good reason to be emotional – the devastating floods arrived just four months after much of her town burned to the ground during one of the worst wildfire seasons in the province’s history. Her home and farm were completely destroyed in the July blaze. Thorpe spent weeks in a shelter and came back to find that the remains of some of the animals that died in the fire were still on the property. Hundreds of thousands of people in western Canada are becoming used to catastrophic natural disasters in summer and winter, as the effects of climate change lead to “once-ina-hundred-years” events striking much more often. Three of British Columbia’s worst wildfire years have taken place in the past four years, and the widespread floods and mudslides last week happened after roughly one month’s worth of rain fell in a matter of days. At least four people have died and about 18,000 people were stranded after all the major highways connecting Vancouver to the rest of the country were severed by destroyed bridges and dangerous slides at points. Thorpe was prepared to take care of herself. She had extra food, water and gas and considered herself lucky that her new home wasn’t one of many damaged or completely destroyed in the floods. Others in the region’s mountain towns were even less fortunate. Roughly 50km to the east, the river that runs through the town of Merritt overflowed and swept through entire streets and homes. City councillor Mike Bhangu said the river appeared to have carved a new path through town, creating an island where some homes and farmland used to be. He said there was some talk of simply letting the new course of the river continue and to build around the change. British Columbia declared a state of emergency last Wednesday. By Saturday, about 14,000 people from several communities in the province remained under evacuation orders. Residents in some areas were subject to temporary restrictions on fuel and non-essential travel, resulting in reports of long queues at gas stations. The restrictions were aimed at easing tensions in the supply chain after the storm forced the closure of the Trans Mountain pipeline and cut two railway lines that lead to Vancouver, Canada’s busiest port. Mike Farnworth, the deputy premier called on residents in affected areas to limit their movement until 1 December by avoiding travel, working from home where possible and taking public transport. “Over the next 10 days we know that we have enough gas for essential vehicles and everyone else who needs it, if we are prudent and conserve where we can,” he said. Federal officials said on Sunday that 500 members of the armed forces had been sent to assist with tasks ranging from evacuating stranded motorists to rescuing livestock. Exemptions had also been made to allow residents of the province to cross into the US for food or fuel and re-enter Canada without a Covid-19 test or quarantine. In Abbotsford, a municipality that was hard hit, crews were scrambling to patch up a 100-metre breach in a dyke as forecasts predicted more heavy rain. The mayor, Henry Braun, said. “If there’s 100mm of rain, if it comes in 24 hours, that’s a big problem. If it comes over three or four days, maybe we’ll be OK.” The dyke protects Sumas Prairie, a low-lying expanse of fertile land created almost a century ago by the draining of a lake, which is a hub of Canadian agriculture. The storms had battered the area, engulfing barns and felling power lines into the floodwaters. Last weekend, Braun said that some farms continued to grapple with rising waters, pointing to one example where waters had risen eight inches overnight. “There’s still 2,500 cows in that corner, dairy cows, and [the farmers] are worried.” The minister of emergency preparedness, Bill Blair, said thousands of animals, including entire herds and flocks, had been lost. Dave Martens is a chicken farmer who was among the many who were ordered to evacuate last week, doing so after frantically moving half of his birds. Soon afterwards, his farm was sitting under six feet of water. “Forty-thousand birds have died in my barn,” Martens told the Canadian Broadcasting Corporation. “It’s not just water. It’s dead animal carcasses. You’ve got faeces, diesel, gas, other contaminants floating around. This is all permeating, getting into our houses. Everything that’s down there is destroyed.” Merritt, which is home to 7,000 people, remained under an evacuation order after the floods caused its 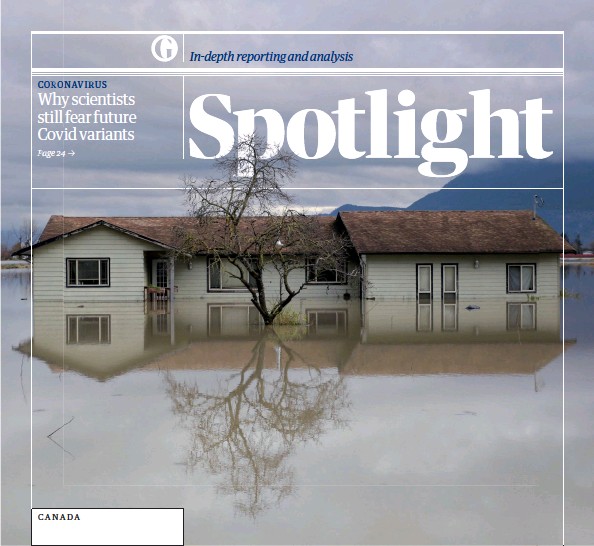