A shift in wealth and power,

DAVID CONN WRITES ON THE BUSINESS OF SPORT

When Sepp Blatter, with that pained fixed grin, gingerly pulled the name Qatar out of the fateful envelope to anoint the host of the 2022 World Cup, global bafflement accompanied the shockwaves propelled by the decision. The outcry that led ultimately to an earthquake at Fifa, followed by the fall of Blatter’s presidency, was prompted by astonishment and suspicion at the vote to send football’s greatest tournament to this tiny country. The 11 years since the November 2010 vote have been filled with investigations into Fifa, leading to a governance overhaul and the 2016 election of Gianni Infantino as president, and a focus on conditions for migrant workers building Qatar’s stadiums in the heat of the Gulf. Through it all, the Qataris have insisted they did not “buy” the World Cup through corruption, and have committed to reforms of workers’ rights. The determined preparations, through the three-year blockade by Saudi Arabia and its allies the United Arab Emirates and Bahrain, which was called off in January, have produced eight signature stadiums, constructed to broadcast gorgeous TV images around the world. Nicholas McGeehan, co-director of the human rights advocacy organisation Fair Square, says of the labour reforms, in particular ending the kafala system that ties workers to one employer: “We recognise that this could transform labour relations in the Gulf, which would be phenomenal, but we are a very long way from effective implementation, and too many companies appear able to subvert the reforms.” Qatar’s hosting of the World Cup is already an illustration of the modern shift in global profile, influence, wealth and power for the oil- and gas-rich Gulf states. That influence has grown since 2010 – particularly felt by Britain, the former imperial power that now, after Brexit, is prospecting for a trade deal. Whatever the truth of allegations made in a 2020 US court indictment that three South American Fifa chiefs were paid, which the supreme committee denies, Blatter has always maintained that the crucial votes resulted from political influence, not backroom machinations. Michel Platini, then Uefa president, and other key Europeans voted for Qatar rather than the US after the French football legend was invited to lunch with his country’s president, Nicolas Sarkozy, and Sheikh Tamim bin Hamad al-Thani, now the emir of Qatar, nine days before the Fifa vote. Platini has acknowledged that Sarkozy made clear he favoured a vote for Qatar. Sarkozy has said he did not have such influence, but the deals that flowed afterwards were much to the liking of France’s president: Qatar Airways bought 50 planes from Airbus and Qatar began mega-funding French football. The sovereign wealth fund Qatar Sports Investments (QSI) bought Paris Saint-Germain in 2011, fuelling PSG since into a super-club. BeIN Sports, the Qatari broadcaster that was originally part of Al Jazeera, paid unprecedented sums for coverage of France’s Ligue 1. BeIN’s wealth and influence extends across football; it is a major buyer of Premier League TV rights, last year paying a reported $500m for 2022-25, and has a current $600m three-year deal with Uefa for Champions League coverage. Qatar Airways became the first commercial sponsor of Barcelona in 2013 and sponsors Bayern Munich, plus the governing bodies Uefa and Fifa, whose four-year deal is said to be worth up to $200m. This football journey for Qatar from obscure, outsider claimant of World Cup votes to wielder of huge power and insider influence is personified by Nasser al-Khelaifi, chairman of PSG, QSI and BeIN, who was in April elected chairman of the European Club Association and re-elected to the Uefa executive committee, two summits of European football decision-making. The Gulf state strategy of national image projection through sport alongside huge financial heft is replicated by Qatar’s regional rivals: Abu Dhabi through its ownership of Manchester City and the global City Football Group, Dubai through its Emirates Airline sponsorships of Arsenal, Real Madrid, Milan, the FA Cup, several more clubs and other sports, including the Tour de France-winning UAE Team Emirates. Saudi Arabia took longer to align itself with sports, and when its sovereign wealth Public Investment Fund bought Newcastle United, it was glaring that Boris Johnson and his government appeared to have encouraged it, rather than acknowledge the concerns of Amnesty about “sportswashing” by a notorious regime. On the day the Premier League approved the Newcastle takeover, the UK announced a consultation for a planned trade deal with Saudi Arabia, Qatar, the UAE and the other countries in the Gulf Cooperation Council. It cited “lamb, biscuits and chocolate” exported by the UK to the Gulf, while expressing hope for massive investment from Gulf states into essential UK industries, including renewable energy, infrastructure, tech and life sciences. A month earlier the Abu Dhabi investment fund Mubadala agreed a $13bn investment from the UAE to Britain, and signing the agreement in Downing Street in front of Johnson and Sheikh Mohammed bin Zayed al-Nahyan, de facto ruler of Abu Dhabi, was Khaldoon al-Mubarak who, in another of his roles, is Manchester City chairman. Sanam Vakil, deputy director of the Middle East North Africa programme at the policy institute Chatham House, says Qatar’s World Cup bid was an element in its wider strategy of emerging from Saudi Arabia’s shadow to project its own, more outward-facing vision. “The World Cup signifies their ambition, to project power and the sense to their own citizens of being relevant on the world stage,” she said. Hassan al-Thawadi, secretarygeneral of the supreme committee, has said Qatar’s spending on infrastructure since 2010, including the new metro system, is projected to be $200bn, and direct costs of the World Cup $6.5bn. Such is the commitment to the project that appeared so outlandish when Blatter pulled the name of Qatar out of the envelope, but is set a year from now to claim the world’s attention, for the tiny, super-rich state in the Gulf. 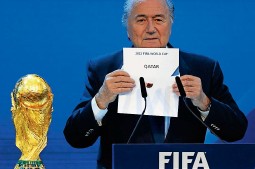