New laws meant to protect us are being ignored, say workers

When Qatar won the bid to host the World Cup in 2010, the triumphant Gulf state began an ambitious building plan of state-ofthe-art stadiums, luxury hotels and a sparkling new metro. Yet over the next decade, the brutal conditions facing hundreds of thousands of migrant workers toiling in the searing heat to build Qatar’s World Cup vision has been exposed, with investigations into the forced labour, debt bondage and worker death toll causing international outrage. In an attempt to quell the mounting criticism, Qatar announced sweeping labour reforms in 2019. This included ending kafala , the system that made it illegal for migrant workers to change jobs or leave the country without their employer’s permission, trapping workers who were being exploited and abused. Other reforms included the first minimum wage for migrant workers in the region and harsher penalties for companies that did not comply with the new labour laws. When they finally came into force in September 2020, the reforms were met with wide acclaim. Fifa called them groundbreaking. The UN said they marked a new era. An international trade union referred to them as a gamechanger. Even human rights groups gave them a cautious welcome. Yet more than 40 migrant workers who talked to the Guardian in Qatar in September and October this year say that nothing much has changed. Despite the International Labour Organisation (ILO) claiming that more than 200,000 workers have changed employers since the new laws were rolled out, the Guardian met only one worker – a young man from Kenya – who had managed to leave his job. His experience spoke strongly of the potential empowerment the new laws could bring to workers’ lives. When he first arrived in Qatar, he was earning 625 rials ($170) a month as a construction worker. Now he is working for a logistics company with a salary almost three times higher. Yet everyone else the Guardian spoke to who wanted to change jobs says it is difficult or impossible to do so. They allege their companies are simply ignoring the new laws. “They threaten us, saying they will deduct the cost of our room and bedding from our salary and refuse to pay end-of-service benefits if we try to leave,” says one Indian security guard. Migrant-rights.org, an advocacy group for migrant workers across the Gulf, describe the end of kafala as a “mirage”. When asked if the reforms had made a difference, another worker from Nepal says: “Kafala is alive.” The new minimum wage of 1,000 rials a month, plus food and board, appears to be more rigorously enforced. Most low-wage workers interviewed by the Guardian say they receive the legal minimum, a significant increase on their previous salaries, except some security guards who routinely work 12-hour shifts. Yet the new minimum wage set by the Qatari government, one of the richest countries in the world, is still equivalent to just $1.35 an hour. Such low wages mean that workers often remain in Qatar for years, unable to afford to return home to their families. One Nepali worker who talked to the Guardian has not seen his wife and child in five years. “When I call my son he doesn’t come to me,” he says. “He won’t [even] talk to me on the phone.” A damning new report published by Amnesty International last week, Reality Check 2021 accused Qatar’s authorities of “complacency” in applying the laws and said it has led to the worst elements of the kafala system resurfacing.The report quoted one migrant worker saying she was threatened by her employer when she wanted to change jobs and told she had to pay 6,000 Qatari riyals ($1,600) – more than five times her monthly salary – for a no-objection certificate or else be sent home. Other practices, such as withholding salaries and benefits to make it harder for workers to leave their jobs, are also still going on, according to Amnesty. In a statement, the government of Qatar rejected the assertions. “Amnesty fails to document a single story from among the 242,870 workers who have successfully changed jobs since barriers were removed in September 2020, or from the more than 400,000 workers who have directly benefited from the new minimum wage through salary increases and other financial incentives,” it said. The government statement also said that improvements to the Wage Protection System protected more than 96% of eligible workers from wage abuse, and that visa centres in labour-sending countries have significantly reduced exploitative practices. It said that in the first half of 2021, 35,280 accommodation and worksite inspections were carried out and 13,724 penalties were issued to violating companies, including worksite closures, fines and prison sentences. 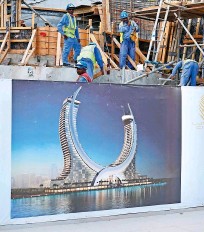