How vaccine programmes and climate action are linked It would only cost $50bn to ensure 40% of the world’s population is vaccinated by the end of the year, and 60% by the first half of 2022. This is a recent estimate from the IMF, which highlights the huge economic benefits of global vaccines. But there is another powerful reason for a worldwide campaign. Vaccinating the world will be crucial if countries are going to act together to confront the climate crisis, which will require many of the same things as delivering vaccines: resources, innovation, ingenuity and a true partnership between rich and developing countries. The Cop26 climate conference in November will be an opportune moment for building this partnership. But to do so, rich countries need to deliver global vaccines. The US is starting to vaccinate children, even as health workers and elderly people are waiting for shots in most of the world. At the end of April, less than 2% of the population of Africa had been vaccinated, while 40% of the population of the US and 20% of Europe had received at least one dose. India, one of the largest vaccine manufacturers in the world, has fully vaccinated 3% of its population. It was clear for some time that this was where things were heading. Despite all the talk of solidarity at the beginning of the pandemic, rich countries built sufficient capacity to produce only enough vaccines for themselves and then proceeded to corner the world’s supplies. By March, high-income countries accounting for 16% of the world’s population had bought up 50% of vaccine doses. As of this month, only 80m of the 2bn vaccines promised to the world’s poorest have been delivered. These inequities were mirrored by what happened with economic policy. While rich countries borrowed massively and spent more than 20% of GDP to help their populations ride out the crisis, poor countries could afford to spend only 2% of GDP. Developing countries contemplating lockdown are caught in a double bind between economic disaster and overflowing morgues and mortuaries. The catastrophic moral failure on the part of rich countries to help poorer nations can only reinforce the strong suspicion in much of the developing world that, despite talk of global cooperation and shared fortunes, when push comes to shove it’s everyone for themselves. This could be devastating for global efforts against the climate crisis. Even if rich countries made binding commitments to domestic climate policies at Cop26, this would be unlikely to get developing countries to sign a demanding agenda. There is an entirely justified perception that the world’s poor are being asked to make sacrifices to atone for rich countries’ past sins of careless growth. The fact that these countries have now shown they care little about the wellbeing of poorer nations obviously does not help. Developing countries will, quite reasonably, seek to be compensated for the more onerous demands of Cop26. Research by the Poverty Action Lab demonstrates that this kind of conditional compensation works: in Uganda, paying landowners to not cut down trees has curbed deforestation and reduced carbon emissions at a cost of less than $1 per tonne. Researchers are studying dozens of other similar policy innovations that could work across the world. These schemes only work if developing countries trust they will be compensated. Advanced economies have agreed to raise $100bn per year for the Green Climate Fund to address the pressing mitigation and adaptation needs of developing countries. But developing countries and their citizens are questioning whether they can trust rich countries to stick to their part of the bargain. How do we rebuild trust quickly? Investing now to vaccinate the world is one such chance. The IMF price tag of $50bn is a rounding error compared to what the US and Europe have spent on Covid relief. Of course, money won’t be enough: vaccines will need to be produced, stored and delivered. Pharmaceutical companies will, somehow, need to be persuaded to share their profits drawn from intellectual property; supply chains to make the vaccines need to be streamlined. Then, a tremendous effort in developing countries will be required to efficiently administer the shots. There is faint indication that the world is heading in the right direction. The Biden administration signalled it would be open to a waiver of patents on Covid-19 vaccines. And the World Trade Organization, World Bank, IMF and World Health Organization have jointly endorsed the IMF plan. But this is all too little. Succeeding in this vaccination effort is our chance to show that the talk of a common community and a shared destiny is more than words ● 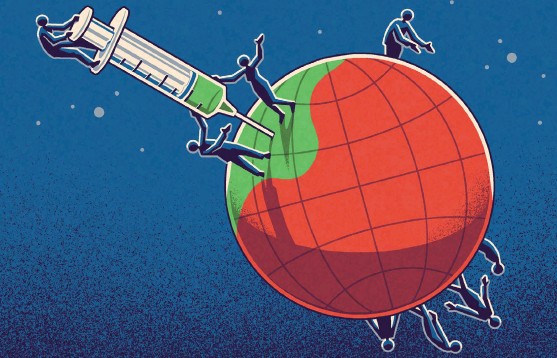