It would be encouraging to think that the massive upheaval afoot in Israeli politics with the unseating of Benjamin Netanyahu also signals a seismic shift in political culture. Perhaps a turning point in its democratic decline, even a move towards ending its rule over millions of Palestinians. Unfortunately, it signals none of these things. The burning desire to depose Israel’s longest serving leader is certainly the driving force behind the disparate eight-party coalition that hopes to replace him. But another factor also unites them – by default, if not by design: the consensus that in determining the future of the Jewish state, the conflict with the Palestinians can be managed in perpetuity. Netanyahu, more than any other Israeli leader, has promoted this idea, cementing it so fast within the national consciousness that it may be his most enduring legacy. It is a sign of how invisible the Palestinians now are in Israeli politics that even the truly historic inclusion of an Arab party in the coalition has not introduced them on to the agenda. Islamist party Ra’am is using its four seats to extract some narrow gains for its own constituency but, like all the other partners, has agreed not to become entangled in the whole Palestinian issue for the purposes of avoiding friction. For a long time, the decades-long occupation of the West Bank and Gaza Strip did play a central role in Israeli politics and in a national debate over the direction of the Zionist project. Even after the failure of the Oslo accords, successive prime ministers at least stayed theoretically loyal to the idea of implementing a two-state solution. Netanyahu did something different. He sold Israelis the idea that the occupation of millions of unwilling Palestinians could be managed as an inconvenience rather than an existential threat. The Arab spring and the Syrian civil war not only shifted global attention away from Israel-Palestine but gave weight to Netanyahu’s premise that now was not the time to even consider the creation of a Palestinian statelet. Amid lurid warnings that Israel’s policies would make it the pariah of the west, Netanyahu pursued stronger economic and diplomatic ties with less fastidious partners in Africa, Asia and eastern Europe. And life was good. No matter how much European liberals decried its human rights record, Israel’s economy continued to soar, singer Netta won the Eurovision song contest in 2018 and the Jewish state ushered in the world’s most successful coronavirus vaccine programme. Donald Trump’s warm embrace, with the US embassy’s move to Jerusalem, the annexation of the Golan Heights and a sequence of peace deals with Arab monarchies, seemed to validate Netanyahu’s entire strategy. In the midst of such national success, it’s not a hard narrative to sell to your constituents – that the Israeli-Palestinian conflict is uniquely intractable and because of eternal Palestinian intransigence, the problem must be managed or at best shrunk rather than resolved. That is not so different from the view of Yair Lapid, the leader of the largest bloc and slated to become prime minister in 2023 if by some miracle the coalition lasts until then. The everyman of Israeli politics, he represents a huge and significant constituency of centrist, secular citizens. But they want civil marriage, subsidised childcare and for buses to run on Jewish holidays more than they want to confront an occupation with little impact on their day-to-day lives. As for Naftali Bennett, the potential next prime minister and once Netanyahu’s political protege, he has done more than anyone to rebrand the whole image of the settlement enterprise within Israel. He transformed the staunch party of religious Zionism from a clutch of dusty old hilltop zealots to one that claimed to offer a home to all Jews, including, like himself, urbanites in hi-tech businesses. The argument that the overriding impetus for control over the Palestinian territories was not religious fanaticism but security proved a concept much more palatable to the wider Israeli public. The presence in the coalition of the fragmented rump of the Zionist left, leaping at the chance to finally regain some kind of political relevance, will also not revive the Palestinian issue. Labour and Meretz have nothing fresh to offer, clinging to the idea of the two-state solution as a kind of magical thinking to perpetuate their dream that Israel can be both Jewish and democratic. The Netanyahu years have shown that aim to be an illusion. Under his rule, the Jewish nature of the state was repeatedly privileged over its democratic character, with incremental assaults on the judiciary, civil society and the media. The political force that has coalesced to unseat him shows no sign of wanting to, let alone intending to, reverse that democratic decline. Netanyahu long co-opted the old Zionist truism that got the fledgling state through war and internal strife – the secret weapon of ein brera (there is no choice). Under Netanyahu, there was no choice beyond him and no choice beyond keeping the status quo. The choices that come now may change very little ● 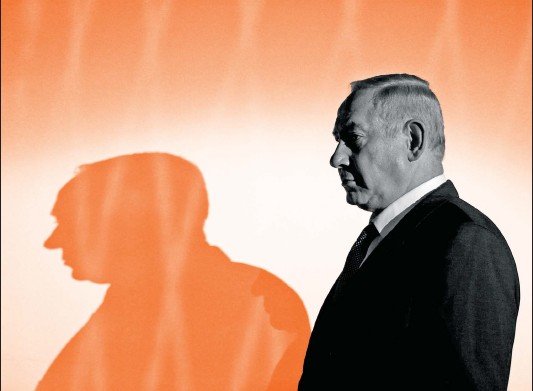