When they came to take Jonnish Saganash away, he was only five years old. It was 1954, and the Canadian government had decided he was to be sent to a residential school in Ontario – hundreds of kilometres from his Indigenous community in Quebec. “He was just a child, a gentle child born on the land of his ancestors,” his brother Romeo recalled last week. Just a year after arriving at the school, Jonnish contracted rheumatic fever and died far from his family. He was buried in an unmarked grave near the school. Last month, news broke at the other end of the country that would bring all those painful memories back. It was “devastating – again”, said Romeo. People of Tk’emlúps te Secwépemc, an Indigenous nation in British Columbia, announced they had uncovered evidence of unmarked graves containing the remains of as many as 215 Indigenous children behind the site of a former residential school in the city of Kamloops. “To our knowledge, these missing children are undocumented deaths,” said Kúkpi7 (chief) Rosanne Casimir. “Some were as young as three.” Indigenous people have known for years that unmarked graves of their relatives dot the country. The news from Kamloops has had Saganash – who was elected to parliament in 2011 as a member of the centreleft New Democratic party – thinking about friends he lost at La Tuque Indian residential school in Quebec. “Those who disappeared or never made it home, those I knew were abused physically, sexually, spiritually,” Saganash wrote in an email. “Their eyes and look flashed in my memory, the things they said to me without uttering a word. The cries for help without tears. Those memories will stay with me all my life.” Between 1867 and 1996, the Canadian state abducted more than 150,000 Indigenous children from their parents and forced them into these schools as part of a campaign of forced assimilation. Thousands were subject to physical, emotional and sexual abuse. According to the official register, 3,213 died. The real number is certainly much higher. For decades, the mortality rate for Indigenous children in these schools ranged between two and five times higher than non-Indigenous schoolchildren. Suicide, neglect and disease all contributed. Roughly 900 students died of tuberculosis. More than 150 died of influenza and a similar number of pneumonia. Memories remain vivid. Shirley Leon recalled seeing cattle trucks driving on to her reserve as a child – and seeing her cousins cry. “They were put on these trucks, and hauled off – we didn’t know where,” she told an inquiry decades later. Soon, the government would come for her, too: she attended the Kamloops school in the 1940s. One official wrote in 1910 that those schools were “geared towards the final solution of our Indian Problem”. There is another name for it: a Truth and Reconciliation Commission, which spent five years hearing the stories of survivors from those schools, described it as “cultural genocide”. The commission’s report was published in 2015 to great fanfare, and came accompanied by 94 calls to action. The commission also identified 20 unmarked gravesites at former residential schools across the country. But, the commissioners wrote, “it is apparent that there are likely to be other unidentified residential gravesites across the country”. The Yellowhead Institute, a First Nations-led research centre at Ryerson University in Toronto, reported in 2019 that only nine of the 94 calls to action had been fully addressed. If confirmed, the grim discovery in Kamloops would be one of the most significant finds in recent years. With support from the provincial government, the Tk’emlúps te Secwépemc hired a ground-penetrating radar specialist. Casimir said the preliminary results meant they could “begin the process of honouring the lost loved ones who are in our caretaking”. Saganash’s family found Jonnish’s grave almost purely by chance, after his sister met a supervisor from the school who remembered him. Saganash said: “When we asked my late mom, after finding her son 40 years later, if she would like the little body to be brought home, she responded: ‘It is not necessary, because I will be with him one day again.’” 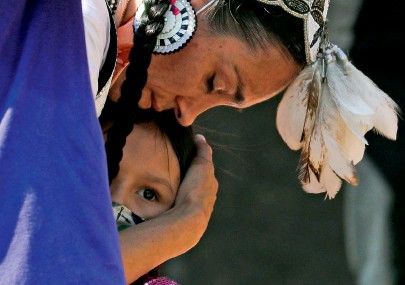