By Helen Davidson TAIPEI and Vincent Ni Agence France-Presse and Reuters contributed to this report HELEN DAVIDSON IS A GUARDIAN REGIONAL CORRESPONDENT IN TAIWAN; VINCENT NI IS THE GUARDIAN’S CHINA AFFAIRS CORRESPONDENT

Hong Kong police arrested a prominent barrister for promoting an unauthorised assembly on the anniversary of the Tiananmen Square massacre, as thousands of officers were deployed to enforce a ban on protests and gatherings across the city. Police confirmed Chow Hang Tung, vice-chairwoman of the group that organises annual vigils for the victims of China’s 1989 crackdown on pro-democracy protesters, had been arrested. A 20-year-old man was detained on suspicion of publicising an unlawful assembly through social media posts. “Their online remarks involved advertising and calling on others to participate or attend banned public activities,” senior superintendent Law Kwok-hoi said. Discussion of Beijing’s brutal military crackdown on the evening of 3 June and morning of 4 June 1989 is all but forbidden on the mainland. And Hong Kong’s traditional status as the only place in China where largescale commemorations were tolerated appears to be coming to an end. Thousands of police were deployed last Friday to enforce a ban on the city’s traditional candlelight vigil, which has drawn huge crowds to Victoria Park on 4 June for more than three decades. The day has traditionally served as a display of people power that China has made clear it will no longer tolerate. Authorities banned this year’s gathering citing the coronavirus pandemic – although Hong Kong had not recorded an untraceable local transmission for more than a month, and held other large public events. Police have also cited the national security law and reminded the public of the recent convictions of some activists. Public broadcaster RTHK, citing unnamed sources, reported that police had 7,000 officers on the streets, conducting stop and search. While last year’s vigil was also denied permission because of the pandemic, thousands simply defied the ban. But much has changed over the past year as authorities sought to snuff out the city’s pro-democracy movement using the security law to criminalise much dissent. Police arrested 24 activists as organisers of the vigil, and several were convicted and jailed. Determined to mark the event, Hongkongers have had to become creative. On the evening of 2 June, young people sat in Victoria Park and studied. A man walked down a Hong Kong street last Friday wearing a shirt hand-painted with “There is nothing to say”. The previous night an artist held a placard aloft that said: “Don’t go to Victoria Park and light candles.” Most of the city’s most prominent democracy figures – many of whom would organise and attend the annual vigils – are in jail or have fled overseas, after Beijing imposed a controversial national security law last year. Veteran political journalist Ching Cheong, who was jailed in China for three years, said the perseverance of Hong Kong had made it the conscience of China. “I don’t think marking the anniversary of the crackdown itself will lead to the collapse of the communist regime, but it’s evident proof the regime is extremely afraid of people knowing the atrocities that it has committed,” Ching said. Lee Cheuk-yan, a now jailed democracy activist, wrote in a message published on his Facebook page last Thursday: “A regime can ban an assembly but it can never ban the indelible grievances in people’s hearts.” The US said last Thursday that it stood “with the people of China” in their fight for human rights. Secretary of State Antony Blinken said his country would “honour the sacrifices of those killed 32 years ago, and the brave activists who carry on their efforts today in the face of ongoing government repression”. The UK consulate in Hong Kong tweeted a captionless photograph of a burning candle. Taiwan’s President Tsai Ing-wen said Taiwan’s people would not forget what had happened in 1989. In a statement sent to Reuters, China’s Taiwan Affairs Office said the island’s government was “smearing and attacking” China when it should be focused on fighting a spike in domestic Covid-19 cases. “In the face of increasing coronavirus infections and death, this veil they are using to attack others is a bit too much.” Some activities appeared to go ahead without interference, including the laying of flowers and ceremonial washing of the Pillar of Shame monument at Hong Kong university. 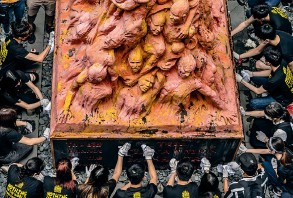