Hundreds detained without trial in new wave of repression

By Jason Burke JOHANNESBURG and Samuel Okiror KAMPALA JASON BURKE IS THE GUARDIAN’S AFRICA CORRESPONDENT; SAMUEL OKIROR IS A JOURNALIST BASED IN KAMPALA

Anew wave of repression in Uganda has led to the abductions of dozens more opposition activists by security forces and at least one alleged death. Several hundred people are thought to have been detained without trial in the east African country in secret prisons, where they are subjected to a brutal regime of mistreatment. The country has suffered a series of crackdowns since campaigning began for presidential elections late last year. The trigger for the recent repression by security services appears to have been the swearing-in ceremony of Uganda’s veteran president, 76-year-old Yoweri Museveni, last month. Museveni won a sixth term in office in January in an election denounced as fraudulent by the opposition. Robert Kyagulanyi Ssentamu – the singer-turned-politician known by his stage name, Bobi Wine – who is Uganda’s main opposition leader, told the Guardian a member of the inner security team had been tortured to death by security operatives; the body of Daniel Apedel had been found dumped at a mortuary in Kampala on 22 May, bearing marks of torture. A police spokesperson said the 21-yearold had been beaten to death by a mob and that charges that he had been murdered after his arrest were baseless. Apedel had told fellow activists he was under constant surveillance by security authorities and had received threats after refusing an offer to “work with the government”. Witnesses heard Apedel pleading for mercy with someone he called “officer” shortly before he disappeared on his way home from work. Three days later, a friend received an anonymous call saying Apedel’s body was at the mortuary. “He had been beaten, hit, his fingers were broken, his teeth removed … it was grave torture,” said Wine. Other detainees have had their joints or genitals beaten with wires, been burned with cigarettes or had fingernails torn out. Many have been members of Wine’s National Unity Platform (NUP) party. The NUP has listed more than 700 members and activists said to have been detained. Luke Owoyesigire, the deputy spokesperson for the Kampala police, said officers had found Apedel’s body at the scene of a reported incident of “mob justice” but were unable to find witnesses because “most people were already at their homes” obeying a night-time curfew. “The gentleman was killed by the mob and the police are investigating who was behind it. There is nothing like torture. [Wine] should stop making conclusions before investigating further on the circumstances of the death,” Owoyesigire said. In the days before Museveni’s inauguration, police arrested more than 100 opposition activists on suspicion of planning to disrupt the ceremony. Last week, Uganda’s general military court martial granted bail to 17 of Wine’s supporters who were arrested in the central district of Kalangala in January. Many others have been kept in jail as lengthy court proceedings continue. Large numbers appear not to have been charged at all. The unmarked vans used by security forces – known as “drones” – are sometimes visible on footage from traffic or other surveillance cameras close to the site of abductions. The Ugandan military has denied responsibility for any abuses. In a national address in February, Museveni dismissed allegations that his forces had illegally detained civilians, saying the Ugandan army “is a disciplined force” and that his party “does not kill” its opponents. However, the president admitted that security services were holding more than 200 detainees who, he said, had revealed a “criminal scheme” run by the opposition and instigated by “local parasites” and “foreign backers”. Museveni has been in power for 35 years and has long been perceived as a key ally of western powers in east Africa. Uganda has received more than $1bn of US aid a year in recent years, as well as $210m of assistance from the UK. Wine appealed to the international community to stop “sponsoring terror”. He said: “The people of Uganda are helpless before the people of the world. The international community must not turn a blind eye to what is happening in Uganda.” 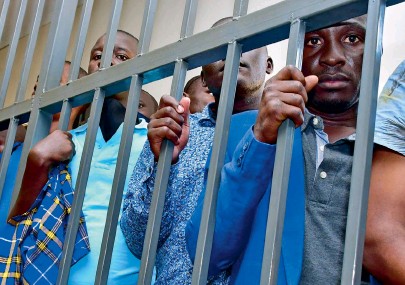