Delta variant splits scientists on whether to lift restrictions

Health experts remain divided over the dangers of the new Delta variant of Covid-19 as ministers consider whether to lift England’s lockdown later this month. Some argue that the new variant, first identified in India, is a significantly increased threat to the UK and have urged that delays be imposed on the total removal of social restrictions, due on 21 June. “By the government’s own criteria, it would be foolish now to proceed on the data that we’ve got,” said Prof Stephen Reicher, a member of the Scientific Pandemic Insights Group on Behaviours (SPI-B), which advises the government. Reicher said the current assessment of the risks not being fundamentally changed by the appearance of the Delta variant was “not upheld”. This view was backed by scientists of the Independent Sage group, who argued that data indicated the Delta variant had higher infectivity and was more likely to cause disease and hospitalisations. Other scientists, while urging caution, say fears that the Delta variant poses a significant new threat are premature. “The suggestion that the [Delta] variant is more pathogenic needs to be taken with a big dose of salt,” said Ian Jones, professor of virology at Reading University. This view was supported by Paul Hunter, professor in medicine at the University of East Anglia. “We need to be a little cautious in assuming that the Delta variant is intrinsically more virulent than the Alpha variant [first identified in Kent],” he said. Virologist Julian Tang, of Leicester University, added: “There was an initial belief that the Alpha was more transmissible, which turned out to be true, and more clinically severe, which turned out to be false.” The head of NHS Providers, Chris Hopson, said the number in hospital with the Delta variant was rising but not “very significantly”. Many of those in hospital in Bolton - the area worst hit by the variant - were younger, with “very few” fully vaccinated patients. This appeared to show vaccines had “broken the chain” between infection and serious illness, he added. A key issue is whether the new variant is more infectious and more likely to trigger serious illness. Researchers argue that over time, viruses tend to trigger less severe symptoms. “From a virus’s point of view, there is an advantage in being more transmissible, you reach more people, but there is no advantage in making people sicker,” said Tang. But Professor Rowland Kao of Edinburgh University sounded a note of caution: “This virus spread virtually instantaneously round the world in early 2020. Then lockdowns were imposed. So we have essentially set up hundreds of laboratory experiments all around the world, a mix that is conducive to producing variants – and some could be more pathogenic than others. However, in a couple of years I expect the virus to become less dangerous.” Scientists say it should soon become apparent if the Delta variant is more pathogenic than its predecessors. Hospitalisations are likely to increase although that might just reflect rising case numbers. “However, if increased numbers of people have to go to hospital because of the seriousness of their condition, and we discover it is not just because there are more infected people but because it is being caused by the Delta variant triggering more hospitalisations per infection, then it would be a very bold move to release all restrictions at that point,” added Kao. Last week, a government spokesperson said “no decision” had been made on whether to ease all coronavirus restrictions on 21 June, amid reports Boris Johnson could delay the move by at least a fortnight. 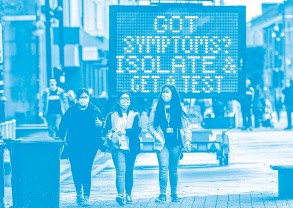