G7 deal is about power,

By Richard Partington RICHARD PARTINGTON IS THE GUARDIAN’S ECONOMICS CORRESPONDENT

G7 deal is about power, A historic agreement has been reached. For decades, multinational corporations have abused gaps in an international tax system that has barely changed since agreements made at the League of Nations in the 1920s. After meetings in London last weekend, the message from the G7 group of wealthy nations is clear: time has been called on tax havens. In a landmark move, a global minimum rate of corporation tax has been agreed, alongside measures forcing large companies and online corporations, such as Facebook, Apple and Google, to pay more tax in the markets where they make their money, regardless of physical presence. Much remains to be hammered out – in a process likely to take several years, before a single extra pound, dollar, euro or yen is handed over – but a clear direction of travel has been set. The London agreement is about far more than tax. As with most global negotiations, the real story is about who holds the balance of power and the reconciling of domestic interests with international demands. For the G7 it is no different. For Rishi Sunak, the UK’s chancellor of the exchequer, hosting the meeting, it was about sending a message that post-Brexit Britain still holds sway. Sources close to the talks said initial UK reluctance to back the Biden plan for a global minimum tax rate centred on dragging Washington closer to trade talks. It is unclear what, if anything, Sunak managed to extract beyond headlines suggesting Britain is an awkward ally. Washington had also made it clear exactly where the balance of power lies – threatening to impose punitive tariffs on the UK and EU countries if they didn’t drop their unilateral digital services taxes. Britain, France and others have used these taxes on US tech companies as a stopgap measure until a global deal is implemented, raising hundreds of millions. Although Washington had demanded their immediate removal, a specific agreement for a global minimum rate of “at least” 15% shows such hurdles can be overcome. For Biden, a global minimum tax is core to his economic agenda as he attempts to raise more revenue to fund a $1.9tn Covid recovery plan. The president is likely to face stiff opposition from Republicans in Congress. Reaching a deal between the world’s most powerful economies helps to strengthen his bargaining power. For Germany, France and Italy, it was about a display of unity to the rest of the EU bloc. Ironic for a deal agreed in London six months from Brexit, this was a moment to forge closer EU integration. The fragile European project is incomplete without closer coordination on tax, as the sovereign debt crisis of a decade ago brutally exposed. Several other details remain to be overcome. There are concerns a stitch-up between the G7 will benefit western powers most, at the expense of lower-income countries. Talks will move to the G20 next month, when other big nations – including Russia, China and India – will join negotiations, before haggling between 135 nations at the Organisation for Economic Co-operation and Development, with an aim to reach a global deal by October. The G7 agreement is a point on the road rather than the final destination. It will be several years before a deal is implemented. However, reaching a unanimous agreement can build momentum. There were also wider political and economic motives. After the chaos of the Trump years, a message is being sent to China, Russia and the rest of the world that the west is back in business. G7 finance ministers fear Beijing wants to do away with the old rules of the global economy dating back to Bretton Woods, seeking to replace it with a system benefiting China. Reaching a deal in London is designed to signal that the western powers are again willing and able to dictate the rules in the 21st century. In the wake of the pandemic, and after decades of neoliberal politics lining the pockets of the few rather than the many, the underlying message of the G7 deal is also about reasserting the power of government over big business. Soaring budget deficits incurred during the pandemic matter far less than a sustainable recovery – raising the prospect that big state economics will be a lasting legacy of the pandemic. Tears are being shed on the neoliberal right that western powers are killing off competition between nations by agreeing a minimum tax rate. The free-market Adam Smith Institute argues the Americans fought a revolution to ensure their tax rates weren’t set in Westminster without representation. They find now that the British have agreed, on their own turf, to have their tax rates set by Washington. 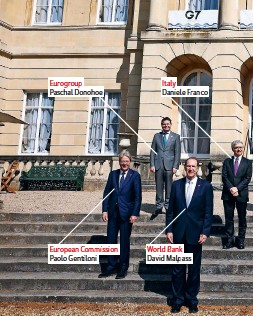