The curtain may be falling on Israel’s Benjamin Netanyahu era,

after a precarious alliance of the prime minister’s opponents proposed forming a new government. What lies in store next, for the nation and the region? On page 22 we profile Naftali Bennett, the religious nationalist who is the new PM in waiting, while on the Opinion pages Daniella Peled argues that Netanyahu’s likely departure will bring no relief for Palestinians. Naftali Bennett does not believe in a solution to the Israeli-Palestinian crisis. His aim is to “manage” it in perpetuity and always from a position of ultimate Israeli control over Palestinians. The hardline religious nationalist, once head of a prominent Jewish settler group and expected to become Israel’s next prime minister, is open about his plans for millions under occupation. A video on his YouTube page presents a colourfully animated account of the far-right politician’s plan, with a lighthearted tone that belies its deeply serious message. “There are some things that we all know will never happen,” says a narrator. “The Sopranos will never return for another season … And a peace agreement with the Palestinians will not happen.” It goes on to detail Bennett’s vision. First is the annexation of most of the occupied West Bank, which it argues is essential not only for security reasons – allowing hundreds of thousands of Jewish settlers to remain there – but also because Israel wants control over its water resources. Based on a seven-point plan Bennett released in 2012, the proposal would squeeze most West Bank Palestinians into urban enclaves with limited control over their lives. A few tens of thousands would be granted Israeli citizenship, to “counter any claims of apartheid”, the document states. People in the geographically separate West Bank and Gaza would not be allowed a “connection” to each other, for fear of bringing “the violence, instability and problems” of Hamas-run Gaza into the West Bank. Finally, it makes clear that Palestinians would never be able to create a state in the West Bank, over which Israel would maintain “complete security control”. Some critics of Israel argue the current reality in the occupied territories looks a lot like Bennett’s plan, as does an abandoned proposal drawn up by the Trump administration. Benjamin Netanyahu – still prime minister for now – has also said he intends to annex large parts of the West Bank. Bennett, 49, was once Netanyahu’s chief of staff and a member of his Likud party, and led the education and defence ministries in his cabinets. Menachem Klein, a senior lecturer in political science at Bar-Ilan University, refers to Bennett as “Netanyahu compatible”. But, while Netanyahu would temper his nationalist ambitions when speaking in English to an international audience focused on a two-state solution, Bennett’s unabashed pro-settler, biblically inspired zeal would bring the country into a new era. He is infamous for incendiary comments about the Palestinians. In 2013, he said that Palestinian “terrorists should be killed, not released”. In 2018, he said Israeli troops should have a “shoot to kill” policy, including for minors. “I would not allow terrorists to cross the border from Gaza every day,” he said. Asked about the army targeting children, he replied: “They are not children. They are terrorists.” His rhetoric has, however, come back to haunt him. To become prime minister in waiting, Bennett has made a deal with the head of the opposition, Yair Lapid, who he has long derided for supporting a twostate solution. Lapid is ideologically at odds with Bennett and his Yamina party, but needed his seats for a majority, and the two have lately described each other as friends. “The left is making far from easy compromises here, when it bestows upon me … the role of prime minister,” Bennett said. The deal has infuriated rightwing voters who believe Bennett has gone back on his principles to ally with a man they thought he detested. The son of immigrants from San Francisco, Bennett was in an elite Israeli military unit before becoming a hi-tech millionaire, selling an anti-fraud software company to a US security firm for $145m in 2005. On some issues, he is less conservative than the hard right, including LGBTQ+ rights and the relationship between religion and state. His main ambition, however, relates to Israel’s control of all the land from the Jordan River to the Mediterranean. Under the deal with Lapid, it is expected that no big decisions will be made on occupation, as it could cause the delicate coalition to break apart. In an interview with the Guardian in 2017, he said there would not be a Palestinian state on his watch. His plan has much more humble aspirations for the Palestinians than self-determination, such as investment in joint industrial zones – many of which would be run by settlers and staffed by Palestinians – and the upgrading of roads. At the end of his YouTube video, guitar music plays as the closing message is displayed: “Doing what is good for Israel.” 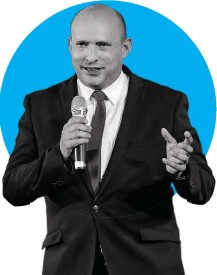